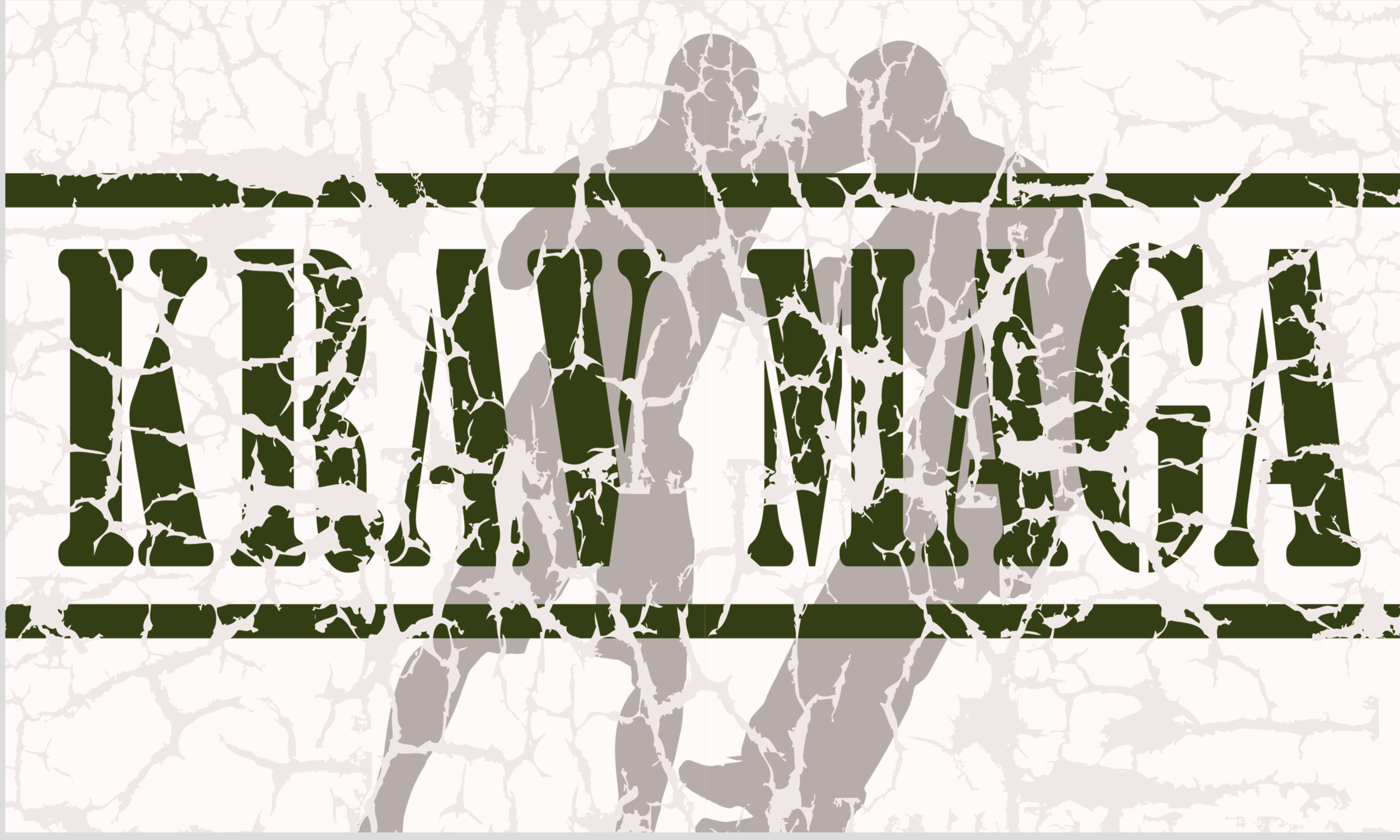 This is a full in depth article about this easy to learn and apply self defense/ martial arts system, that was born out of need. The system has been tried and tested on the battle field as you are about to find out (carry on reading). Made up of various martial arts,

Which are also detailed below, The founder utilized all the appropriate effective techniques and concepts of those martial arts and adding his own developed this system. Now s global self defense system you will have no trouble in finding an instructor in any major city around the world. A great choice for self defense if, you would like to get straight down to the business of defensive techniques read on! some of the best krav maga fighter arr in the special services.

Brief history: Brought to you by the need to eliminate the threat.

Krav Maga started like many Martial Arts. It was born to necessity. Krav Maga was started in the 1930s during WWII and Israel’s War of Independence in Czechoslovakia by Imi Lichtenfeld. He first started teaching his “style” in Bratsvia to the Jewish community so they could protect themselves from the Nazi militia. Finding himself in Palestine eventually after many hardships during the war, he began to train with the Zionist Community defence organizations. They quickly saw his natural fighting abilities and his ability to teach his fighting style. By the late 40’s he was the close-quarter combat authority for the Israeli Defense Force (IDF).

Dating back to the Old Testament, Krav (struggle) was the term used to describe Isaac’s battle with Gabriel, the Angel of Death. Krav Maga has building blocks that have developed from thousands of years of Martial Arts. Though it has very many strong competitive aspects, Krav Maga has a “don’t get hurt” approach.

With Imi’s competitive background in Martial Arts, gymnastics, and dancing established this attitude after breaking a rib before a competition. He was unable to continue and complete. This opened his mind to this new-look at Martial Arts. The initial “win at all costs” approach to competition and his new “don’t get hurt” ideals eventually fused to help develop what he called Krav Maga.

Train to be a weapon. Dangerous and Controlled. “Safety OFF”

This is a system of Martial Arts that is for anyone who chooses to train. Born for necessity, adapted for everyone. Krav Maga is not dependent solely on the strength of one person but on the ability to train and fight in close quarters. It does this by mixing aspects of:

This is the best krav maga information, those styles above are great!

What do you get from your hard work?…

The traditional grading system in Krav Maga follows the Judo grading system that Imi implemented into it. Starting with a white belt, then yellow, orange, green, blue, brown, and then black (Dan) and then from there it goes for 1st – 9th Dan.

The fundamentals. The blue prints for success in Krav Maga

Neutralize the threat as quickly as possible. Disarm, disable, immobilize. When your life is on the line there is no need for etiquette. You do whatever it takes to stop the situation.

Keep it Simple (Of Course)

No kata, no forms n, no patterns. Krav Maga is all techniques. Nothing else. Essentially the basic elements of Martial Arts are not practiced in kata.

Simultaneous Defence and attack Yin and Yang in full bloom.

For every attack, there is an equal defence and response. Block and strike at the same time. Instantaneous response to eliminate and downtime in combat. This is a similar trait found in Wing Chun.

Retsev, or Continuous Motion.The eb and flow of combat.

Using the idea of attacking until the opponent can no longer defend the attacks is what this is about.

Use Of Weapons Of Opportunity. The Jackie Chan portion…

Ideal for Self Defense, for more great of my personal martial arts for self defense checkout my great post of self defense just click => BEST SELF DEFENSE STYLES THE BASICS

You could also find great krav maga schools in most cities, krav maga for women is also great with many taking up this direct form of self defense and I would recommend it. 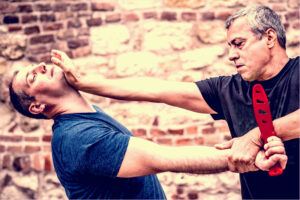 Vulnerable targets such as the eyes, groin, throat, armpits etc. are all targets that evoke the “flight” in “fight or flight”. Attacking areas such as these make the opponent revert to natural pain and pressure reactions and can stop the attack in its tracks.

The use of subduing techniques such as arm locks, limb manipulation and the like will de-escalate the situation to a manageable level and improve your krav maga skills.

Using shared space in close quarters is a concept of Krav Maga that trains fluidity in motion. This concept, much like a push-pull concept to turn defence into an attack. It is economy of motion at its finest.

Using your weight from foot to foot helps you understand and improve techniques’ efficiency and power generation. Training this concept will allow you to naturally shift weight in all directions including dropping your centre of gravity and rising when required. This goes hand in hand with continuity of motion.

Connection to the Ground

Using the ground in a proper stance makes a very sturdy foundation for your techniques. Push off the ground, pivoting through stances and applying the aforementioned other concepts makes this concept one of the most key concepts of Krav Maga, and almost all other Martial Arts as well.

The advantages of Krav Maga are almost endless. It is damn near perfect. There are a plethora of techniques implemented from many “styles” of Martial Arts that can make Krav Maga truly one of the most effective Martial Art systems available. Learning to naturally use every moment of combat to your advantage makes the defender into the attacker.

Understanding weapon defence and use through implementation and adaptation makes anyone trains in Krav Maga a force to be reckoned with. Understanding the Concepts of Krav Maga with their relative connection to other Martial Arts can gain you a fair advantage, should the moment arise, in combat against these other styles.

The disadvantages of Krav Maga are not too many, such as any Martial Art, as they are created to be advantageous. With a wide variety of trains in these concepts from other “styles” of Martial Arts, there’s is no focus on one differentiating aspect. ie: no main identifiable aspect.

Take for instance Isshin-Ryu Karate. Short stances, natural blocks, vertical fist punch. Also, Vovinam, Aerial combat and animal-based forms (kata) etc. although Krav Maga is itself a specialized Martial Art, it can be very wide in concept (though this is truly not a bad thing)

The benefits… work hard and reap the pay-out! 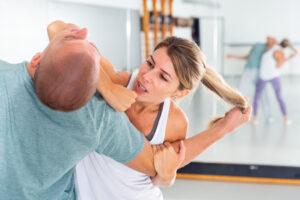 Benefits of Krav Maga range from health to knowledge to lifestyle. As with any training, sport, Martial, or other, Health becomes an apparent beneficial factor. Through training mentally, physically and spiritually, you become well-rounded in all aspects of Krav Maga.

Studying, understanding and applying everything you are taught and respecting where the knowledge comes from displays humility and loyalty not only to your instructor and the club but just as importantly, to yourself. Living the Martial way as you are taught by a dedicated instructor can enrich your life far beyond the walls of your training hall.

A brief comparison to other self-defense systems. Mine is better than yours!!!!

Krav Maga lends itself to many aspects of the fighting arts. Boxing with its defensive stance and footwork is used always. Aikido with the fluid motion and ability to manipulate the opponent and their limbs to an offensive advantage. Krav Maga uses this along with Jiu jitsu to take advantage and eliminate the attacking limb from the combat equation.

It takes these systems and takes them a step further. Using the weapons approach from Koub-do and Escrima-like systems makes any tool a weapon. This is where in comparison to other self-defense systems we can see that Krav Maga was made for raw self-defense and not tournament flair.

Some of the best krav maga training tools

Equipment used in Krav Maga can vary from club to club but initially, all Krav Maga students should have appropriate hand and foot gear such as BOXING GLOVES or MMA style gloves and footwear to protect the top of the foot and toes. Mouth Guard and Groin Protectors are standard in almost all clubs globally. Training Dummies Bob and target pads for hand and feet to train focus and accuracy.

Heavy Bags and  to understand, Training pads and shields for punches and foot kicks and the impact on a heavy target that will move with varying difficulties. Fake weapons for simulation training and the like are used to train in defensive to offensive attacks. Turning the attacker into the attacked, learn the best krav maga

Whether you have a need to defend yourself or you just want to learn a Martial art Krav Maga has it all. Raw Martial Art at its finest. Why not check it out! and learn great krav maga skills

“KRAV MAGA so that one may walk in peace”

2 thoughts on “The Best Krav Maga Information You Will Find”