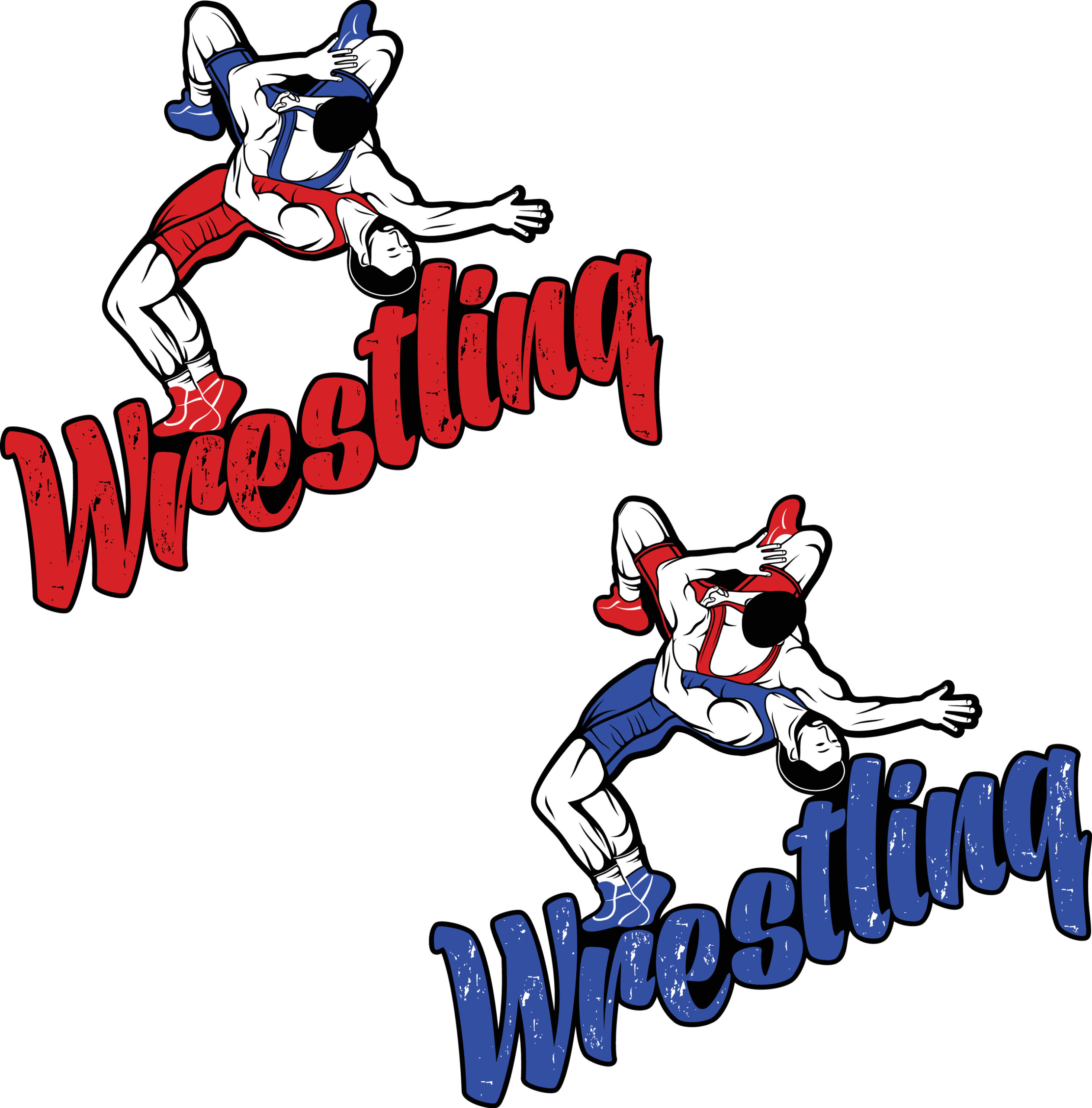 Learn about this wonderful, skillful fighting system that will teach you the clinching skills you need to be a great wrestler, Covering different styles, history and what it takes to train and master this art. Some current great UFC wrestlers fighting a high levels, Breakdown of things like weight division, time, training and techniques, you will not be disappointed, please read on!

Wrestling is a martial art that separates men from boys. It is one of the toughest, yet most rewarding sports on the planet. So let’s take you through the fundamentals of this Olympic sport and its benefits. You might even be inspired to begin your wrestling or MMA career or start freestyle wrestling training.

A Brief History of Freestyle Wrestling

Today’s freestyle wrestling is based on the catch wrestling from the 1800s. Developed in the UK by J. G. Chambers, it was brought to the US by immigrants. It grew in popularity and was enjoyed in festivals and carnivals.

Freestyle wrestling is one of the most respected categories in the Olympics today. But it waited to join until the 1904 Summer Olympics held in St. Louis; Missouri.

The Best Wrestlers in MMA

As wrestling is a challenging sport, plenty of wrestlers have made it big in MMA. Examples from today include the current and former UFC welterweight champions Kamaru Usman and Tyrone Woodley, respectively. Stipe Miocic and Daniel Cormier are two MMA greats who exchanged wins over each other for the UFC heavyweight title throughout 2018-20.

Wrestling is a weapon that can be used to counter and stretch out an opponent; regardless of their discipline. Wrestling teaches body positioning, opponent control, and defense. Therefore, it is considered by most experts as the best base for competing as an MMA fighter. Promotions like the UFC had wrestlers pioneer them.

Even today; plenty of champions have wrestling backgrounds.

Wrestling’s intensive training makes you stay in shape, both physically and mentally.

Few discipline makes you sweat and burn in the way wrestling does you have to be flexible and able to adapt fast. The sport literally revolves around throwing a similarly-weighed opponent like a ragdoll. Hence, it adds balance, reflexes, strength, endurance, and agility to maximize your gains, and laser like focus as one wrong move can be disastrous.

Wrestlers train for conditioning and stamina that put the average Joe to shame. Gassing out is a term relatively unknown to them. This is because the sport works your body’s muscles at all angles. Training for wrestling means that you won’t need cardio yet you’ll end up with a better cardiovascular system, a better heart rate, and endurance. You’ll also burn more calories, Feel the improvements as you train. 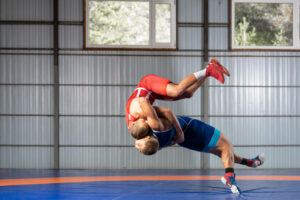 Wrestling’s demanding nature and training also adds mental strength. It embodies the phrase “never give up”, whether you’ve got a tough opponent or you’re making weight. Grappling with your opponent also improves your decision-making abilities.

This is because you’ll have to think quickly and figure out your, or the opponent’s next move in a fraction of a second. Resilience, restraint, and discipline are three other qualities that you pick up during the wrestling journey.

Plus, knowing how to wrestle is a unique skill that adds self-confidence.

Fundamentals While Free Style Wrestling Training to Become A Wrestler

Okay, so wrestling is great; we’ve established that. But how do you become a wrestler? What is the know-how that you’ll need to wrestle? Well, it involves understanding some of the terms below.

Wrestling pits equally-weighted opponents against each other. You are put in each class based on your weight and you need to be below the maximum.

You should always pick a weight class that resembles your natural weight. Otherwise, you’ll be too focused on your cardio and starving yourself to actually train your wrestling technique. Ergo, you’ll be too tired to compete in the lower weight class you’ve selected, even though that category supposedly had lower competition. 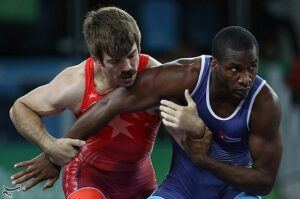 Greco-Roman wrestling is the much older and stricter brother of freestyle wrestling. The basic difference between them is that the former doesn’t allow your legs to defend or attack.

You also need to be in constant contact with your opponent while doing a takedown. Hence, Greco-Roman wrestlers slam their opponents better. Freestyle wrestling allows you to throw your opponent to the mat and capitalize afterwards. This means that it trains you better at initiating wrestling takedowns.

Other differences between the two lie in the types and positions of holds allowed. They also deal differently when no one’s ability to score points’.

Folkstyle wrestling is what aspiring freestyle wrestlers are put through while competing at a college level, which is why it is also known as collegiate wrestling.

The difference, according to team USA, is that collegiate wrestling is based more around opponent control. Freestyle, however centers around the exposure points’ you can file. The differences continue at the bottom position. In collegiate wrestling, the goal from the bottom position is to get away from your opponent. It teaches repositioning and how to maintain a strong base position.

Yet in freestyle, the goal from the bottom position is to prevent yourself from being exposed. The main goal in winning a freestyle wrestling match up, is to try to pin or expose your opponent’s shoulders to the mat. This means that you learn hip control at the top position. These kinds of stoppages don’t happen as much due to the points’ system, but they still do. 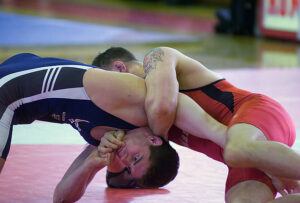 Here are the basic rules of wrestling.

A typical freestyle wrestling match is divided into two periods. Each is of three minutes with a 30-second break.

The wrestlers face each other on the mat and aim to pin each other to win by ‘fall’. They can also win by points’ which is easier to do. Three illegal moves by an opponent in a match result in a win by disqualification.

A match doesn’t even have to end for a decision. You could build a ten-point lead and win regardless of the time.

Points are awarded for holds, throws, takedowns, reversals and putting the opponent on their back.

The points’ for one move are in the range of 1 to 5, based on difficulty. Players can also gain points’ for illegal moves by their opponents.

There are no draws. If the points’ are equal, the match is won by the player with fewer moves executed. If that doesn’t decide the bout then the illegal moves are counted along with the final point to decide the victor.

We can sum up the ones from SportsRec though.

This is one of the basic moves in the game, trying to take your opponent down. Doing a leg sweep involves holding the opponent around their chest and sweeping their legs using our own with forwarding momentum. This is a trigger for performing a variety of moves on your opponent.

This move can help set up more points’ and pinning combos. This requires connecting your hands from behind an opponent via their neck and triceps. Stepping in using your leg and then popping your hips upwards, can allow you to take your opponent on a 180-degree ride to the mat.

This wrestling fundamental needs no introduction. It involves locking your arms around the opponent’s head and arm. It can help you throw the opponent down from a standing position. It can also result in a rolling combo on the canvas.

Everyone knows about suplex city thanks to Brock Lesnar. Simply “bear hug” your opponent and lift them off. Twist to ensure they land on their back. Another variation calls you to lift the opponent from behind and fall backwards into a pinning position.

All moves that could injure your opponent are illegal in wrestling. These moves will cost the executor points’. This means actions such as hitting them with strikes and kicks. You’re also not allowed to touch the opponent’s face, grab their uniform, or twist their body parts.

Some techniques also get slack, such as the figure four leg-lock, standing reverse-waist hold, full nelson, bridge position, ankle trapped to outside, hooking your legs around the opponent’s, and the reverse leg ride. Armbars, neck of leg-locks, and moves that could injure the opponent’s spine – all aren’t allowed.

This means doing pull ups to build up your lats, abdomen, grip, and shoulders. Deadlifts are another important inclusion and they build up the entire posterior chain. Squats build up your legs and help with testosterone for your other muscles to grow. Other exercises involve building up your grip using implements to do curls, pull ups, and climbs. Conditioning exercises are another important chapter.

You’ll come across many coaches and plans but they’re all likely to incorporate these moves to build you up. 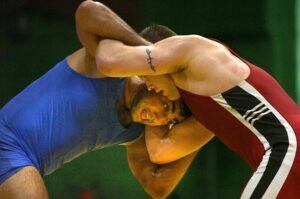 We all start as beginners and there’s no shame in wondering how long it’ll take to go pro. That entirely depends on you. You can progress very fast if you put in the work. If you have talent, you can train to make a university’s wrestling team, and even get a wrestling scholarship.

Then it is a matter of getting better, building up a nice record, and winning championships. Of course, getting better at wrestling means training hard and regularly with a good mentor. Building a record requires you to wrestle everybody from your own teammates to wrestlers from other colleges.

This can literally take hundreds of matches. To be able to make it into an NCAA bracket, you’ll need to be good enough in your weight class to win all the qualifying tournaments. Should you stack up an impressive trophy cabinet, you can even qualify for the Olympics by performing in the Olympic trials.

Or you could just get good and pursue MMA as a career. The possibilities are endless.

While they certainly exercise more, wrestlers also live a healthier lifestyle overall. They need energy to out-grapple their opponents and hence eat only the most balanced and nutritional diets. Also, your wrestling coaches will get you to train regularly and never miss out. But they’ll also lay emphasis on getting that eight hours of sleep for recovery.

Equipment and Clothing Needed for Wrestling

Wrestlers don’t need a lot to wrestle. The clothing is a spandex-made singlet that should make you mobile while training for or competing in a wrestling bout. The  is worn headgear over the head and the chin to protect you from head and ear injuries. Finally, you’ve got the wrestling shoes to give you better traction and ankle support.

We have covered plenty of info on freestyle wrestling training, Having plenty of benefits like fitness, agility, strength, focus and much more mentioned above. If you have an interest in this discipline I hope this article has given you the knowledge you need to help you move onto the next stage.

“The biggest risk in life is not taking one”