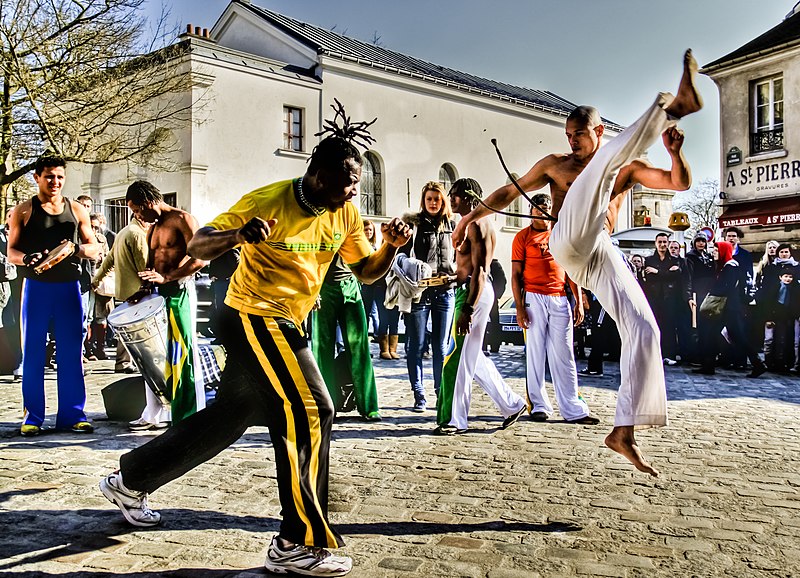 The Brazilian martial arts dance capoeira is a martial art practiced in Brazil mainly, this art has a long history and is very popular. Having high kicks a rhythmic feel to the art, is great to watch and takes time to learn. It is a global martial art with schools in many countries with many practitioners. Some fighter in the UFC and MMA are also trained in the art and have used capoeira techniques in their fights with great knockouts mainly from spinning kicks, the art combines dance acrobatics and music.

History of The Art

The Brazilian martial art dance Capoeira is an Afro-Brazilian martial art, This martial art was created by slaves in the 1500 who were captured by the Portuguese and brought to Brazil from Africa (mainly Angola) to work the fields. They developed those fighting techniques for self defense designed to fight multiple attackers.

This art was disguised in dance so the slave owners would not know they were practicing the martial art with a desire for freedom. An infused dance this martial art is very popular today with street Acrobatics. This art finally became legal in the 1930`s and could then be openly practiced and is now the 2nd national sport and is now also practiced by millions around the world.

The instruments used for the music are pandiero, atabaque, agogo and berimbau.

The Brazilian martial art takes years to learn and covers a lot of different techniques,

Use of various parts of the body are used such as hands for punching and slapping, feet for kicking, the use of various elbow strikes, kneeing, arms, the head for head butting, legs and feet for take downs and sweeps. The moving involves evading attacks and defense. Short combinations are occasionally executed and practiced.

Ginga is a which involves rocking back and forth in constant motion a rhythmic fashion and is fundamental footwork for Capoeira. Is one of a few arts that uses such moves. Used for evading attacks, delivering attacks, allowing you to torque ready to strike. You will be able to quickly avoid or slip incoming attacks. All of those are in great techniques within the Brazilian martial arts dance, emphasizing lower body kicks.

There are various cartwheels which involve cartwheels across the front which are targeted with the feet to the opponents head this can be doe from either side. There is also half cartwheels directly attacking the head of the opponents and involves great accuracy and acrobatic ability. Along with jumping kicks one of which is known as a butterfly kick in other martial arts. A move known as a walk over, which looks like a front cartwheel, L kicks with one hand on the floor.

There are also full hand springs a gymnastic moves common in performances by floor gymnast. All these moves and similar moves are very complex and need years to perfect. Please ensure you get a good instructor from a good well-established school. You will need a certain level of fitness and flexibility to do those high level, physical moves.

Feints as mentioned above, slipping and bobbing

Kicking there are a high number of kicks to learn and master those include, round house, spinning, double leg, helicopter kick and straight kicks just to name a few, With this in mind flexibility is key along with good fitness, You will not see some of those kicks anywhere else only in the Brazilian martial arts dance as a number of those kicks are only in this art.

Hand and arm strikes, you have the straight punch, elbow, knife hand, eye attack, back fist, hook punch, slapping of the ear drum attack. Those strikes art common in many martial arts.

Head butts which are unique one is from a floor position and another coming up and hitting the bottom of the chin.

take downs in Capoeira most take downs are sweeps they are also some scissor take downs.

There are some break dancing moves

There are also some throws (Judo) which are rarely used but are within the system along with throat locks etc those art part of the self defense section of the art.

As a beginner you will not have to be in any physical shape, you will get into shape learning the art. There is no age limit as you train what you can do in this art, there is some think for everyone. You will learn capoeira acrobatic movements, dance, Portuguese and music

Doing the Brazilian martial arts dance will help you lose weight, increase your overall flexibility and agility, your stamina will increase due the fitness needed to do those moves. Overall body Strength, balance and spatial awareness, confidence

There is no real deep philosophy in Capoeira it more about the techniques that work and the system. I would say it’s a complete system manly known for the high acrobatic kicks and cartwheels and walk overs but has the throwing side and self-defence techniques.

The Brazilian martial art Capoeira does not have any forms it only has movement plenty as mentioned above plenty of kicks, defenses, punches, acrobatic moves, etc

Why not check: CAPOEIRA FEDERATION HERE

This Brazilian martial arts dance is a great martial art, developed by African slaves with a need to defend themselves and liberate the themselves from slavery. After being taken from Africa to Brazil as slaves. ingeniously developed this art disguising it as a dance.

There is no doubt this is an effective martial art as there has been plenty of success in the modern day MMA with various knockouts due to those special kicks and the natural agility of the Capoeira fighters. The system is like no other fighting system.

If you like music, martial arts, fitness, dancing this may be the martial art for you? there are plenty of schools in most countries due to the art being global

This art will keep you in shape and be an effective martial art and you will not need any equipment,