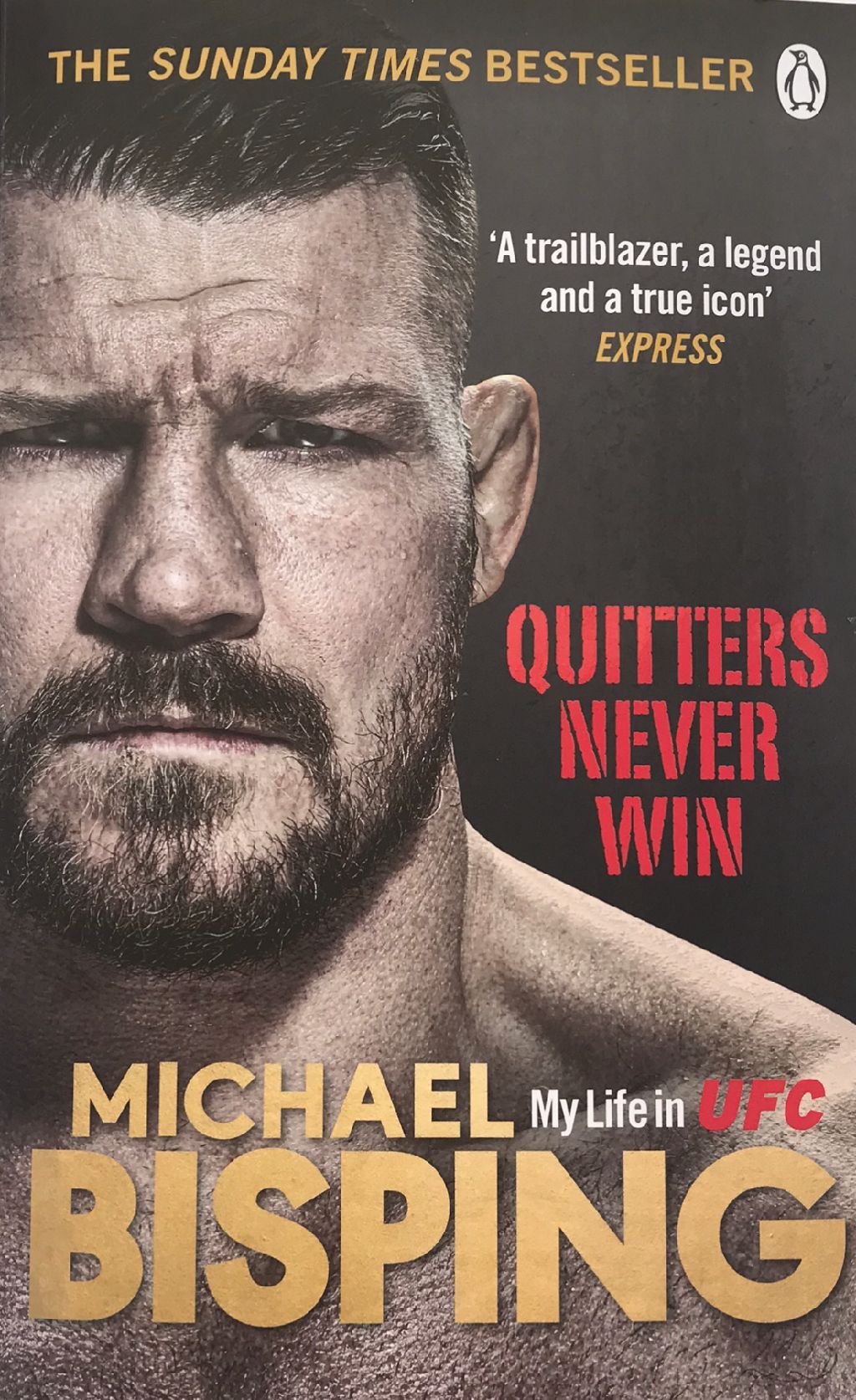 Quitters never win book by Michael Bisping, this book is great quoted as a trailblazer, a legend and the man a true icon by an international newspaper and a best-selling Sunday newspaper. This man was born a fighter, as this book tells his incredible story from Grandparents to UFC champion and beyond. No hold barred autobiography gives full details of his personal and profession life. You get to know the man behind the legend, everything from low points to high points. This is a great book from a martial art’s legend. Buy this book on BUY NOW CLICK=> Quitters Never Win Book

Coming from an army family going back to 1560, from generations of army personal explains the strength of Michael Bisping. With family having high ranking within the army. Michael Bisping come from a very long line of fighters and joined the British military himself. Coming from a big family he began martial art’s at the very young age of 8 studying Japanese jiu jitsu which involves throws, groundwork, kicks and punches. Entering tournaments in his teenage years full details within his book. Winning various titles fighting again kick boxers and Karate fighters etc. Great writing in this book quitters never win.

Also mentions his early life as a DJ going into more details on various nights out and gigs etc going into street fighting and some interesting nights out a must read. Another interesting story was the night Michael found an intruder in his kitchen with a petrol can. His early and brief brush with the law and the result you would not believe. Finding the love of his life and fatherhood. Moving in to the British MMA community making a name for himself. Then finding out at that particular time the people was running that scene. The name of the book itself shows the determination of the man, the name of quitters never win is a good motivation mantra.

Winning cage fight belt and 28 days later knocking out his next opponent in 45 seconds going on to have more knocks full details provided with great passion.

Heading for the UFC American full detailed accounts of winning various contests, this is a great section plenty of details regarding the UFC journey anyone who love the UFC will love this section covers details of fights opponents and all the people involved, fight details given with incredible details of personal events, making you feel you are at the event itself, Championship fights.with over 15000 tickets and 3 million worth of tickets. Then onto 21,390 tickets, as far as this great fighter has gone proves his mantra quitters never win. If you are a cage fighter or martial artist this book is a must for you as there are great details regarding fighting, training along with sparring and the great championship fights. This is the section for the die hard fans and those with a vested interest in martial art’s, the things you learn in this section may help in enhance your training and motivate you to do your best in your particular martial art, just remember quitters never win a mantra that propelled Michael Bisping fighting career.

How and why are detailed with the emotional mastery filling you with sadness, the pain felt during those intense times and the bravery of Michael.

The intense build up, the pre fights great detail of fights and injuries, round by round detail. Finally, reaching the summit with the pre training and fights along with the way, The final fight with amazing details never before express with such passion and honesty,

Acting in various film roles with some very high profile actors, getting into the film game.

Building up to retirement and why and in the final chapters,

I have reported on some sections within this book to give you a snapshot into the brilliance of this book, from his early years training in Japanese Jiu Jitsu, training and fighting with the best. Having set himself goals early in his career not to mention various obstacles which could have resulted in his career going in the wrong direction.

This is an inspiring story that proves from humble beginnings with the right drive and consistency you can achieve unbelievable achievements from Lancashire to Las Vegas. This no holds barred book gives full details of life, family, personal. And profession stories. Written in an entertaining, funny, serious, glamorous, inspiring and down to earth way.

A sports’ legend, shown in this book by the injuries sustained in fighting and during fighting but those never deterred him from his reaching his summit, Gives you an insight into the MMA and UCF worlds in great details around that time.

An easy to read book with a great structure, various chapters tackling specific periods in his life, this book also has beautiful photos of personal life and profession life which shows the transformation from contender to Victor and beyond.

Great book, one of the current best-seller, get the FULL story  buy your copy today from Click Picture link,

Please provide any comments or personal reviews, thanks