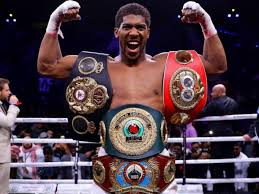 This is a book review on Anthony Joshua King of The Ring, This book is based on the post fight Klitschko and Anthony`s fight story looking at the earlier life and career of the young Anthony Joshua covering family life, street life, starting boxing, British title fights, Olympic Games, MBE, World championships fights and finally the great Klitschko fight.

This is a great book for any boxing fan and being an Anthony Joshua fan even more important.

Covered in this section is Anthony`s birth, the area where they lived and interesting information about his parents and siblings. The joys of baby Anthony and even then showing signs of future stardom. Find out who introduced Anthony to boxing and what other sports as a younger he liked.

His mother enrolled him into a boarding school in Nigeria at the age of 11 where he had to raise at 5am every morning to collect fresh water. Why was he sent? find out in this book. Thankfully he was allowed to return after a short time, you can read the full story for yourself once you get your own copy King of the Ring. Returning to England he was a natural sportsman taking part in many sports but at 16 got into bad living drinking eating bad foods and smoking.

After a brief spell in prison for fighting and stuff, Anthony was let out on tag, Then getting back into boxing again and meeting someone who could see his potential as Anthony started to listen and learn the craft and skills needed to improve to higher levels of training and fighting, He also found something he was good at and not only committed to the training and learning he also done homework by reading books of the past greats like Mike Tyson, Joe Lewis etc.

He was working at that time as a brick layer the fund himself.

Read how he got arrested for drugs but, managed to stare his life in the right direction and avoid a possible life of crime.

After four years of good training Anthony was looking forward to the London Olympics and had his eye on the gold medal. Covering many hours in the gym and sparring etc, Anthony was really putting the work in and was determined to win. Details of training methods and mindset are given during this time as an armature boxer. Naming those who guided him through this period of his boxing career.

All the build up to 2012 including friends, training possible setbacks etc This is a great section covering plenty of (Anthony)`s daily life activities and various dilemma throughout the process. Real personal stuff.

The Olympic fights given in full details blow-by-blow along with score card information from the judges. This section will give you all the boxing information covering the awesome punching ability of Anthony. Taking the best armature boxers from around the world and the great atmosphere around team GB and being on home turf made this year was extra special. The boxers fight 3 x 3 minute rounds for each tournament they enter.

Winning the Gold medal, the fight is documented, read the details a going onto receive his MBE later and what Prince Charles said to him?

The Battle of Britain

This section is written in great detail, the build up and battle for the commonwealth title, including the relationship between Anthony Joshua and Gary Cornish, having mutual respect for each other this was an interesting fight you will read about all the belts on the line and Gary hoping to made history.

After the fight what next, Dillon Whyte taunting Anthony Joshua get the full inside information on the build up to how this fight came about.

Champion of The World

This is my favourite chapter in the book as Anthony is now an established professional boxer and is unbeaten at this point and is looking to win his first world tittle to become world boxing champion for the IBF belt. The current holder Charles Martin is not known as one of the best heavy weights of that time was known as a big hitting southpaw.

This chapter gives you the full insight into the champion Charles Martin covering his previous fights and opponents, training, boxing and what the boxing world thought of him as a champion. The lead up to the fight itself.

The actual fight is detailed and finally giving the post fight analysis then going onto what each boxer did next in their careers.

This whole chapter like the other parts of the book are detailed giving you information you will find hard to get anywhere else.

=>CLICK THE PICTURE BELOW TO BUY DIRECT FROM AMAZON<=

This is an amazing book as it starts from the beginning, back to the early family life of Anthony Joshua`s parents and siblings. Then covers his early life, you can find out why as a younger he was sent to Nigeria for a short time.

You will also get insights into the heavyweight division, what possible contenders were looking to fight Anthony Joshua,

Being a world champion and taking that landmark fight on 29th April 2017 at Wembley Stadium against Vladimar Klitschko and go on to win WBA, and IBO belts, This finest heavyweight contest of all time.

This books shows how a young who man can achieve so much by putting in the hard world even when is seems the chips are stacked against you. Making his parents and family proud, winning the gold at the Olympics, British tittle and world tittles. also, receiving MBE from Prince Charles at Buckingham Palace back in 2013. This is a very inspiring book.

This is a current Heavyweight Champion that has achieved so much and has a great a long career ahead of him.

Please let me known in the comments, in the box below your own thoughts on this book.

2 thoughts on “King of The Ring Book Review”